The second day of our trip in New York City was a Saturday. We woke up very early since we were still on Danish time, but that meant we got to be one of the first ones up to get the complimentary pastries, coffee, and tea at our hotel.

We stayed at Hotel Evelyn located near the Flatiron District, and the lobby there was so warm and cozy. I very much enjoyed our nice quiet breakfast there. In Denmark it is pretty common for a breakfast to consist of pastries, and a warm drink, so the breakfast at Hotel Evelyn was perfect. It was something light to start the day, and still left us plenty of room for a great lunch in NYC later. :o)

I really enjoyed my stay at Hotel Evelyn. It is a newly renovated hotel, the service was really great, and the location was perfect. We actually didn’t take the subway once while in NYC and just walked around the whole time, and if you do have to take the subway or a bus it’s located right by the Hotel. My only complaint is the elevator. It was very slow, and tiny, so I would recommend staying on a lower level floor, instead of the top floor like we did. Other than that, I would stay there again if I could next time I visit NYC. They even offer to store your luggage after you check out of the hotel which was perfect for when we were leaving, since our flight to Texas was later in the day. So we got to walk around NYC a bit more, luggage free.

After breakfast, we went out to explore. It was still early so NYC was not quite awake yet, but that meant it was not that crowded, which we liked. 🙂 If you have never been to NYC, it is more crowded than you could ever imagine, and everyone is in a hurry.

After a short stop at CVS for cough drops, and medicine to keep me going through out the day, we decided to go to Times Square, check out the large Macy’s department store, and just explore. As I mentioned before, I was very sick, in fact I had bronchitis, and tonsillitis. So after a lot of walking it was a perfect time to try The Original Soup Man for lunch.

Not only is soup good for when you are sick, but being a huge Seinfeld fan, this was a place on my list of musts.

Surprisingly, the line was pretty short there (2 or 3 people ahead of us), and the service was pretty normal. We ordered two soups, chicken noodle, and jambalaya, and two waters. We thought it would be good to order a small portion so we had room for dessert after. 🙂 Each soup came with a slice of freshly baked bread, an orange, and a chocolate truffle. We managed to find a little park nearby to sit (8th Ave./56th Street), although Central Park was very nearby, at this point I was feeling pretty weak so the sooner we got to sit down and eat, the better.

The soup was really good. I was surprised at how complicated the soups were. They were definitely homemade. The chicken noodle soup was spicy, and tasted so different from any chicken soup I’ve ever had. I tried the jambalaya and it was really good as well, and I normally don’t like fish soup. So the Soup Man definitely knows what he is doing! 🙂 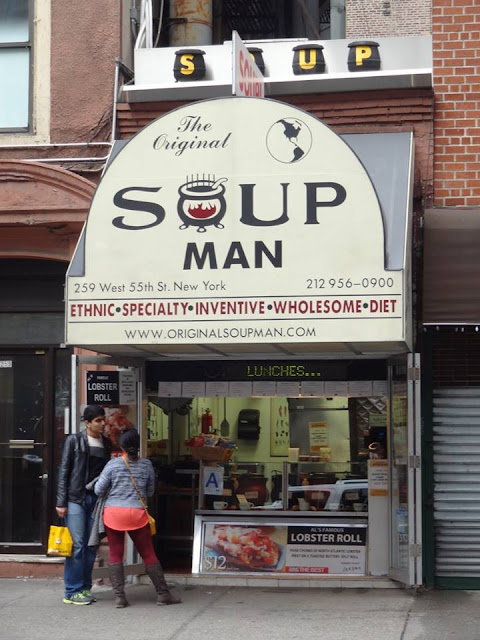 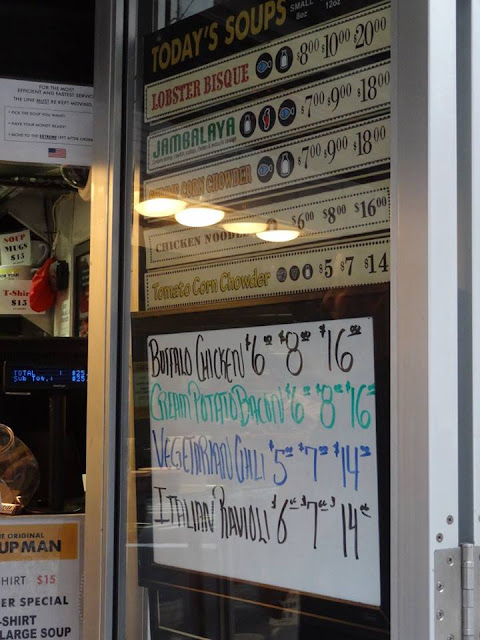 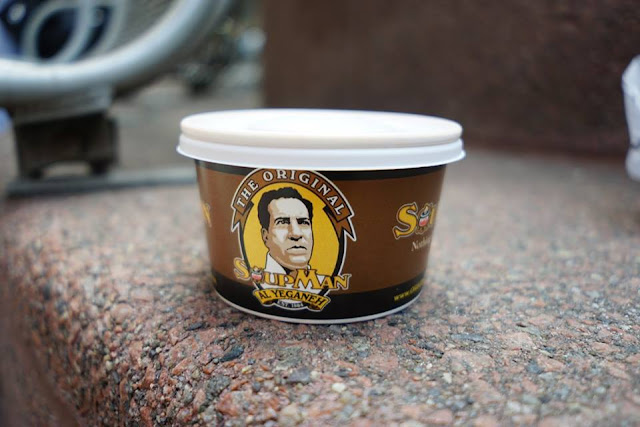 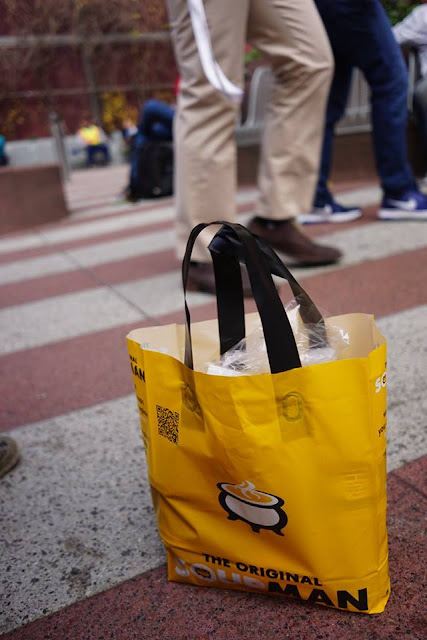 So after we had some soup, we wanted a little afternoon tea/coffee and dessert. Can you tell I’ve been living in Europe for too long? 🙂 Well, we decided to try a place nearby the Original Soup Man called The Bread Factory Cafe.

This place was not one that I knew about before hand, but I did plan to have dessert in NYC. I got a cupcake and mint tea, and my boyfriend got a lemon pie and coffee. We also got a few cookies to try. Although my cupcake looked so good, it was pretty dry, but the lemon pie tasted a lot better. All in all it was a nice place to relax a bit, and I guess I just picked the wrong dessert to order. A lot of people were going in there to eat the pizza so perhaps that is better. Is there a place you like to get dessert at in NYC? Let me know in the comments below. 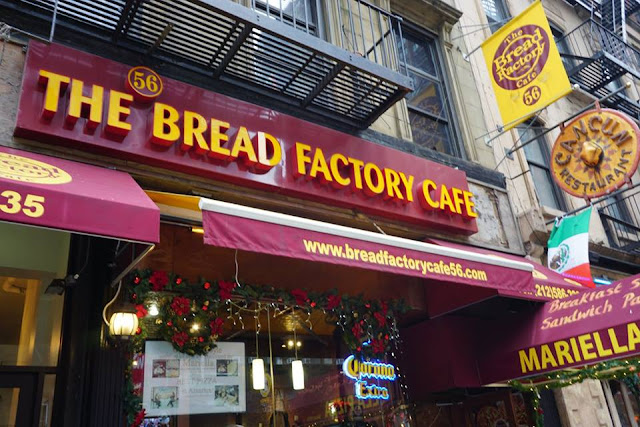 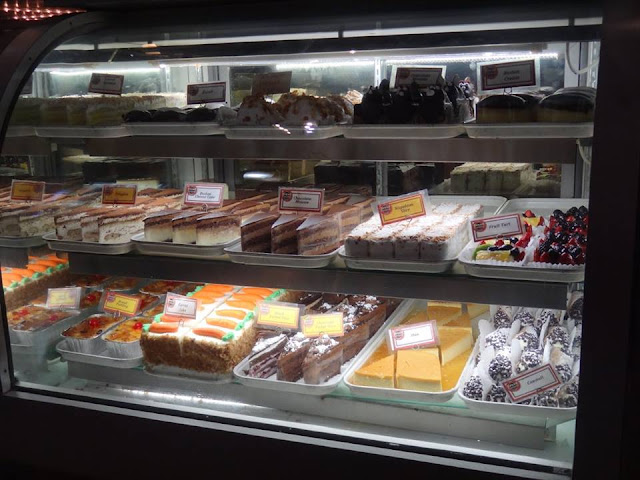 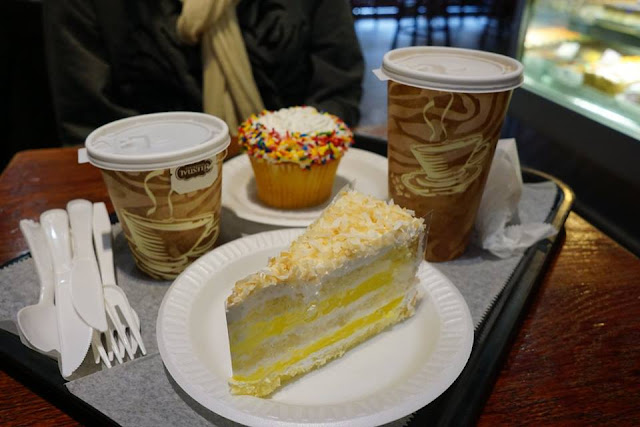 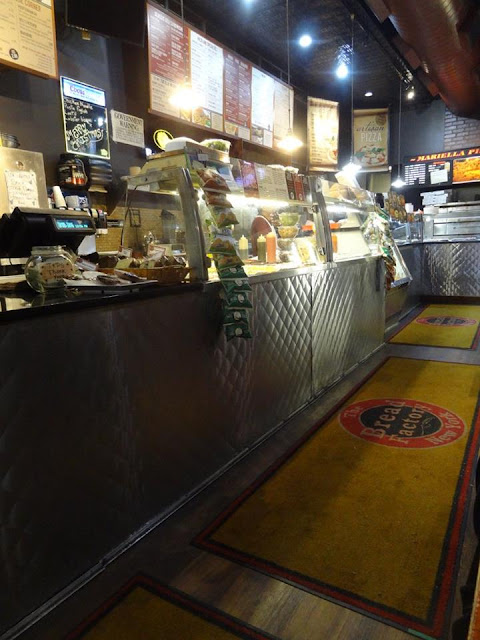 After dessert it was on to more exploring and a stop at Rockefeller Center. Later that day we got dinner. Since I was feeling pretty sick (hate to keep mentioning it, but it is the truth), my sweet boyfriend went out to get us some Cheesesteak Sandwiches from Shorty’s Philly Steaks.

Shorty’s was pretty much right by the hotel, and I had read online that it was really good. They even have their bread shipped directly from Philly. My boyfriend is from Denmark, and he had never really had a Cheesesteak sandwich so I thought this might be the best time to try one.

From what he told me, he had a pretty interesting experience there. The place was pretty much a bar, and he said it was difficult to figure out where to get the Cheesesteaks, and no one was willing to help him. He managed to bring some food to me, and it was good. It tasted different than the Cheesesteaks I have had in Texas, but I’m not sure what that means hehe. The fries were also good. 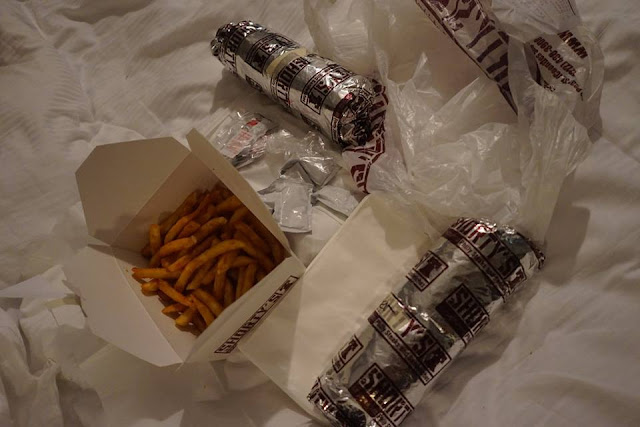 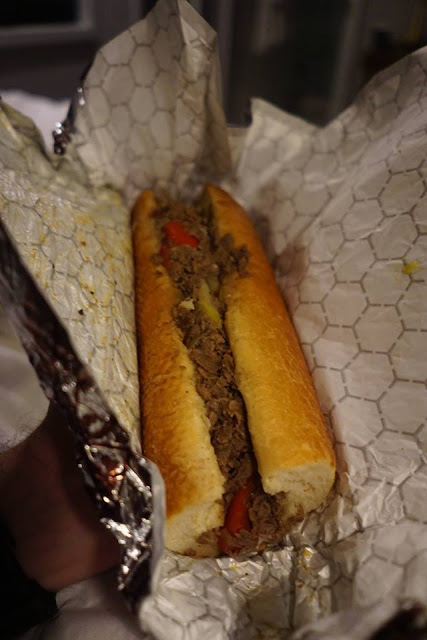 Check out what I ate in NYC on Day 3 here!