Caesar salad is one of my favorite salads, but it can be difficult to find a good dressing. It turns out that it’s pretty easy to make homemade. The tricky part is pouring the oil into the egg yolks, and slowly whisking everything, but once you get the hang of it, you’re set. 🙂 Just remember to pour in a thin stream of oil while whisking everything together, if you pour too much oil at once, then it will separate.

If you want to try my recipe it is below, as well as a step by step video. Hope you enjoy it. 🙂

Note: If it’s your first time making such a dressing you could also whisk the oil into the egg yolks first until the “mayo” is the right consistency, and then stir in the additional ingredients after.

The more oil you put the thicker the dressing will be. If in the end it is too thick you can add a little cold water to the dressing.

To make homemade croutons just cut some slices of french bread into cubes, add olive oil and salt and pepper, and place on a baking pan. Broil the bread in the oven until toasted. Watch it carefully so it doesn't burn.

To assemble the salad cut up romaine lettuce, grate fresh parmesan cheese on top, then mix in the croutons, and caesar dressing.

Steak au poivre is something I never thought I could make. I’ve had it in Denmark at French restaurants and loved it, but like most sauces there is a degree of complexity, especially when it comes to French cuisine. Steak au poivre is essentially steak in a pepper sauce, and to all those who think it might be too complicated for you to make, it is relatively easy with this recipe, the most complicated part is cooking the steak. Hope you enjoy it! 🙂 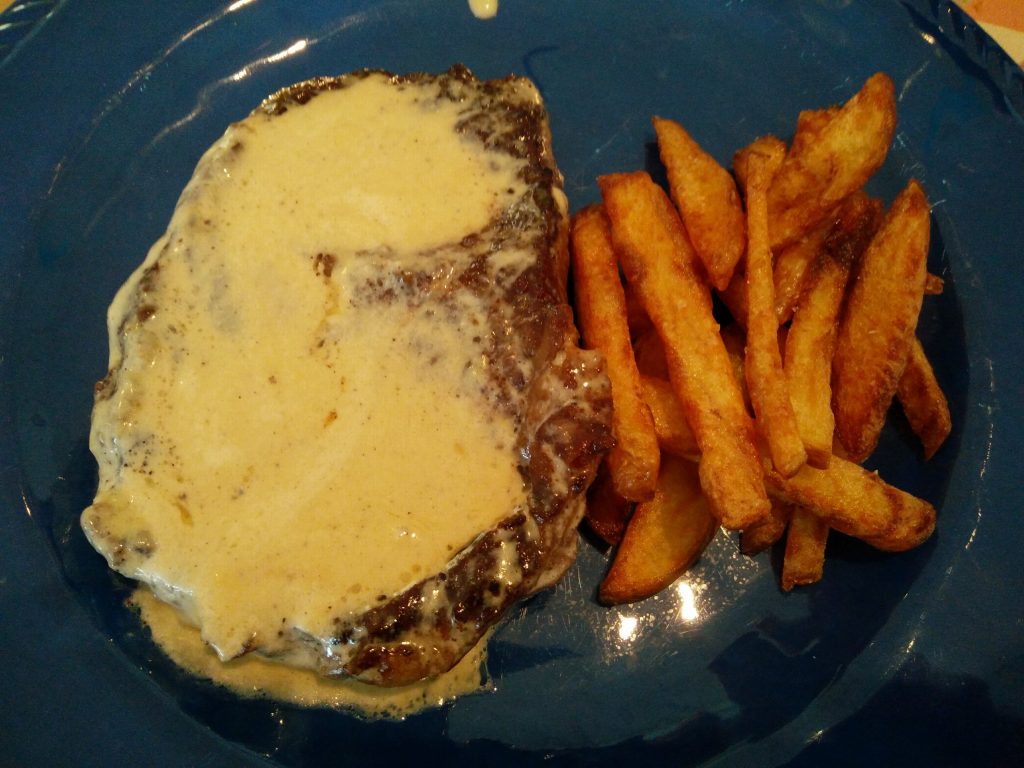 A few weeks ago, I decided to go out and pick some wild blackberries in Copenhagen. I thought it could be fun, and was hoping to have enough to make a recipe I found on the New York Times website by Julia Child.

In just a short time my husband and I managed to pick 4 cups worth of blackberries (more than enough for the recipe I wanted to make). 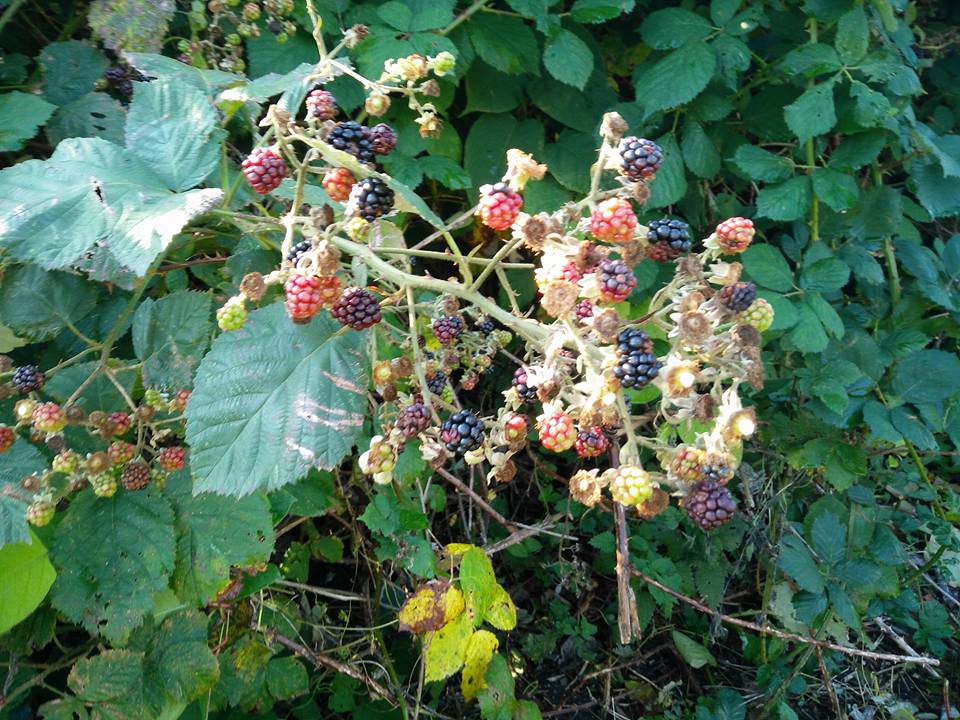 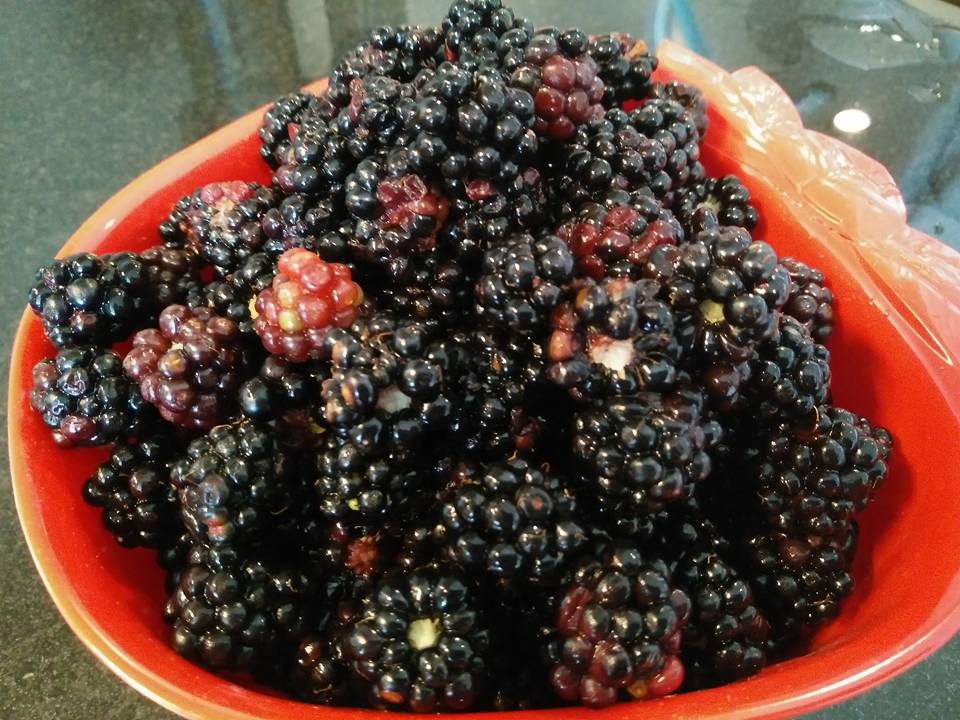 After coming home, and giving them a good rinse, I was ready to make this baked french dessert. The name of the recipe is Blackberry Clafoutis, but reading up on the name, it turns out a Claufotis is made with black cherries, and a Flaugnarde is made with other fruits. So to be correct, I’m going to re-title this recipe as Blackberry Flaugnarde. 🙂

This dessert is really easy to make, it is almost like a light thick pancake with fresh fruit baked in, and dusted with powdered sugar. 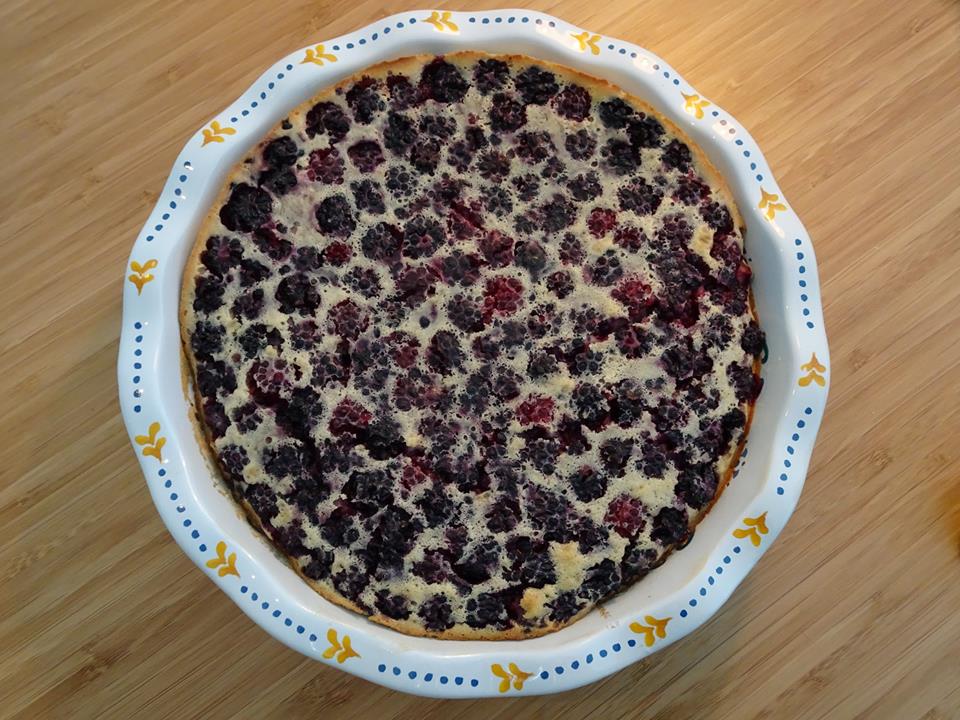 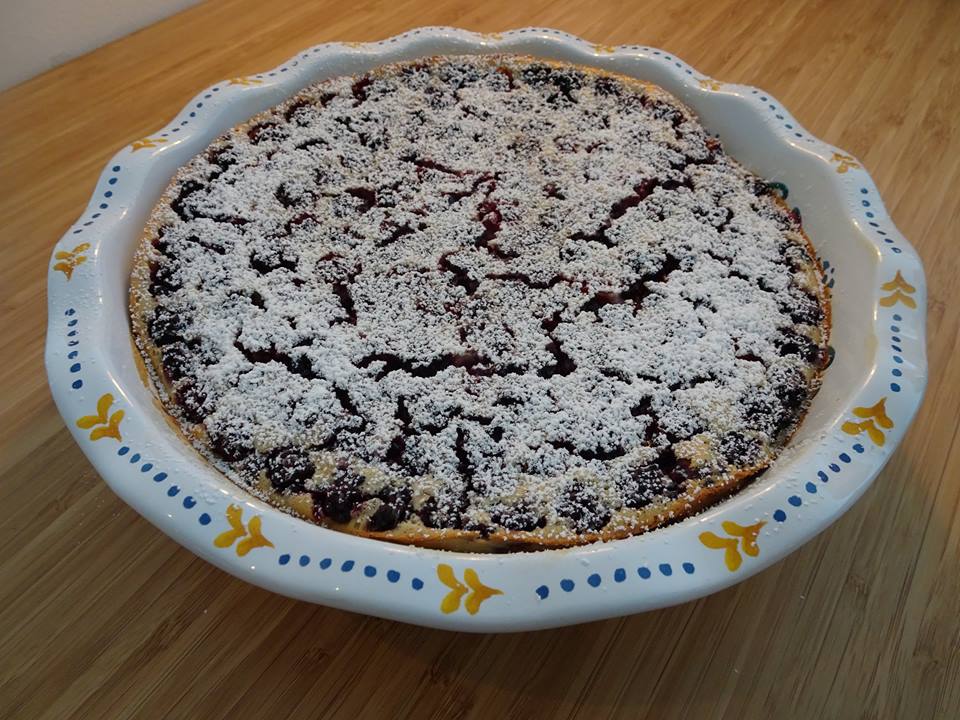 I never had this dessert before, but it took the otherwise sour blackberries, and made them very sweet and delicious. I found it to taste just as good cold, as warm. Hope you enjoy it. Recipe is below.

Pour a 1/4-inch layer of batter in the baking dish. Turn on a stove burner to low/medium and set dish on top for two to five minutes, until a film of batter has set in the bottom of the dish. Remove from heat.

Spread berries over the batter and sprinkle on the remaining 1/3 cup granulated sugar. Pour on the rest of the batter and smooth with the back of a spoon. Place in the center of the oven and bake about 50 minutes, until top is puffed and browned and a tester plunged into its center comes out clean.

A little over a year ago I posted a recipe on how to make potato & egg breakfast tacos. To my surprise, this is the most watched video on my YouTube channel. So I am going to try to share more recipes on how to make other varieties of breakfast tacos, and I hope you will enjoy this! 🙂 There are three basic steps, make tortillas, make the filling, and put the filling in the taco. 🙂 Oh yeah, and eat the taco hehe

So sausage & egg tacos are no different. You can start by making tortillas, or cooking the sausage, whichever you prefer. You can even warm up the tortillas as the last step. I wrote a recipe (below) on how I make these tacos and made a video to go along with it. I hope you like this recipe, and I do encourage you to either buy freshly made tortillas and salsa, or make homemade tortillas and salsa, it makes a huge difference in flavor.

The recipe makes 3 tacos, but just remember you need 1 egg per taco, and 1 sausage link per 3 tacos, so if you want to make more tacos then just make more eggs and sausages according to how many tacos you want to make. 🙂 I hope that makes sense! 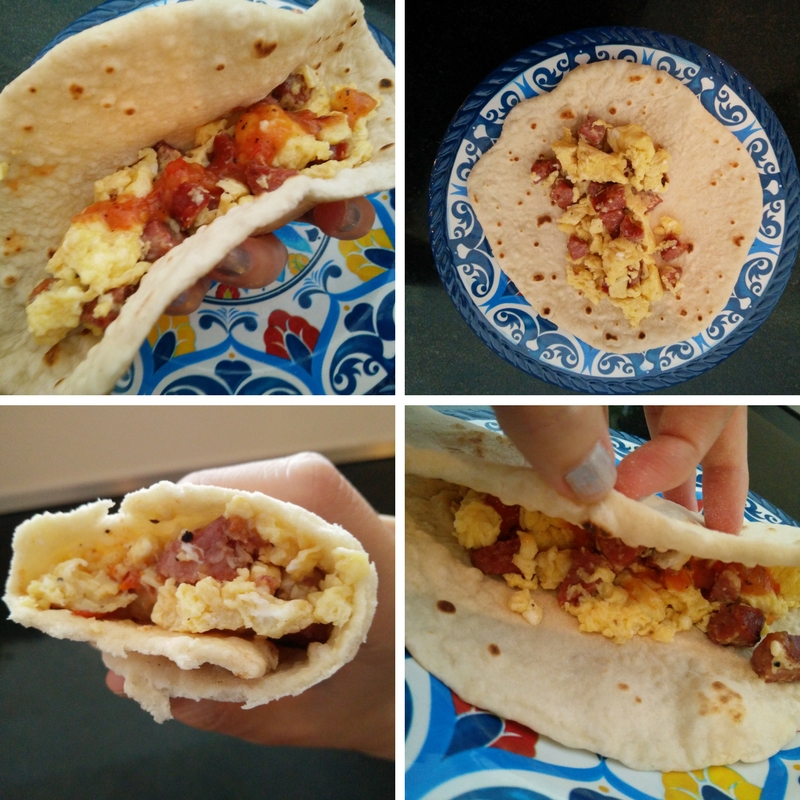 French Toast is commonly served as a breakfast food in the United States, and is a dish made in other countries as well. I think the more common way to eat french toast in the U.S. is with powdered sugar and honey on top, but my mom always made it with cinnamon & sugar as the topping, so that is the recipe I am sharing today. 🙂

French Toast is basically a slice of bread, dipped in egg, milk, vanilla, and cinnamon, fried in a pan, with sprinkled cinnamon & sugar on top. It is actually very easy to make, and can be made with whatever bread you think might be good. I got a little bit fancy here and made it with leftover homemade cinnamon swirl bread. Sounds like a cinnamon overload, but it really wasn’t. 🙂

The recipe is below. It makes 3 servings, but if you have a large family, you can easily double or triple the recipe. As far as the cinnamon & sugar topping, just sprinkle the amount you want on top of the bread, you don’t have to use the entire amount for three slices of bread. I usually just have some already mixed up on hand.

If you want to see a video on how I make French Toast, click here! 🙂

Let me know in the comments, how do you like to eat French Toast? 🙂 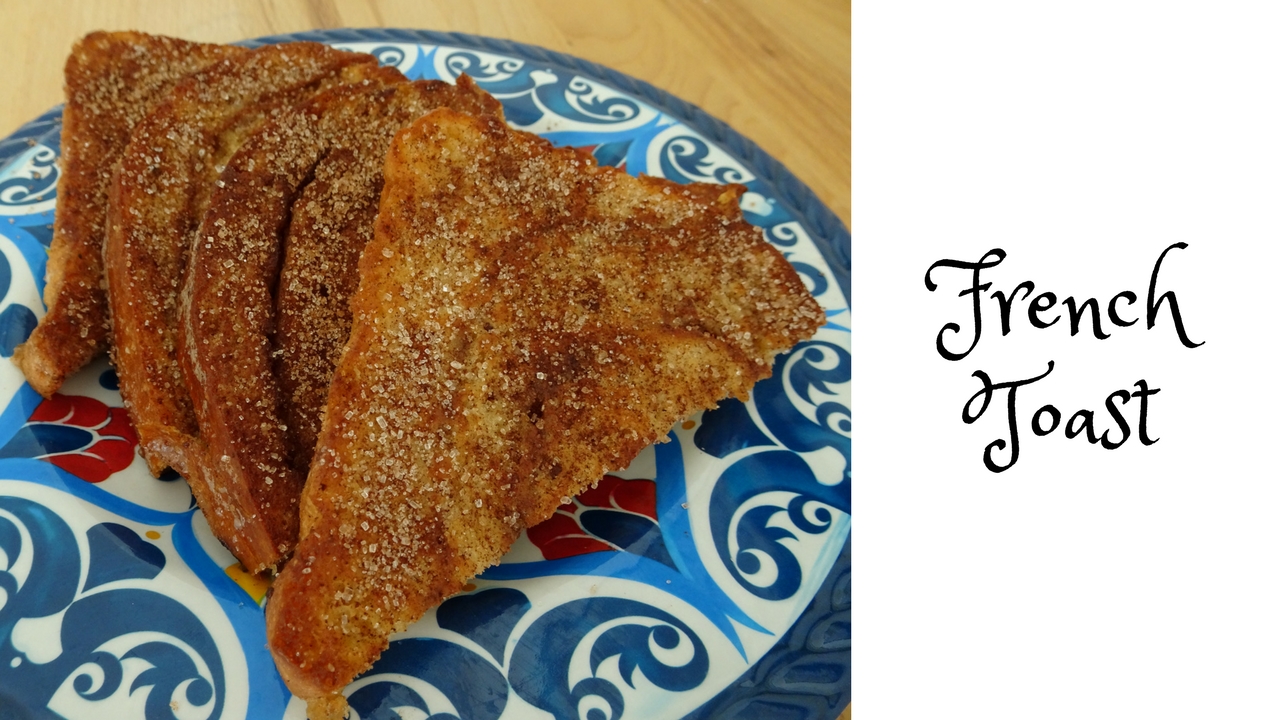